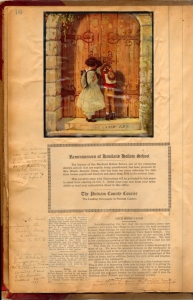 Collected by Minnie Barnum Durga and published in The Putnam County Courier beginning with the Oct 7, 1927 issue. Scanned by Edward T Scrivani from the original newspaper articles pasted in the Minnie-Barnum-Durga scrapbooks in the collections of the Patterson Historical Society; ocr corrected by Christine B Neubauer and Ron Taylor; paragraph numbering auto-generated by software .